Rosalie Warren on 'Coping with Chloe'

Maybe some of you remember author Rosalie Warren kindly appearing as an interviewee on this blog last year. At the time she spoke about how Phoenix Yard Books had accepted her novel for girls aged eleven upwards.

That novel is to be released next Monday, March 21st. How exciting!

I am pleased to welcome Rosalie back today to celebrate the publication of her latest book.

So, Rosalie, without giving away too much of the plot, would you like to tell us a little about 'Coping with Chloe'?

'Coping with Chloe' is about a twelve year old girl called Anna who has an unusual relationship with her twin sister, Chloe. So unusual, in fact, that she believes Chloe now lives inside her (Anna's) head and shares her body. Why? Well, the reason will emerge as you read the book. At the beginning, Anna is happy with the arrangement, in spite of the reaction of her family and friends. Then a good-looking new boy called Joe arrives in Anna's class and seems to want to be friends with both Anna and Chloe. Anna is pleased at first, because Joe is just about the only person who is aware of Chloe's presence. But when he can't make up his mind which twin he likes best, trouble starts to brew. It's not helped by Lisa, the class bully, who has designs on Joe of her own. And when Chloe turns on Anna and starts to threaten her, things get very nasty indeed.

This is a story about sibling bereavement, as well as some other deep issues like bullying, parental separation and physical abuse. But it's written, I hope, with a light touch and lots of humour. Anna wins through in the end, with a new understanding of what has happened to her and Chloe, and better relationships with her family and friends.

Where did the inspiration for the book come from?

I wish I knew! Anna appeared inside my head one day and started talking. In fact, I sometimes wonder whether this book is partly about what it's like to be a writer, though perhaps that's pushing things a bit too far. But Anna demanded to tell her story, so I wrote it down, and it was one of those times when writing is a bit like reading - you have no idea what's going to happen next.

How long did it take you to write it?

The first draft took about six weeks. That may not sound long, but in that state it was pretty unreadable by anyone, including me. It took another couple of years to get it into its final shape. Part of that process involved getting an excellent appraisal from Cornerstones, who helped me see where it was going wrong and make it fit for publication.

It's not really so very different, I find. I'm not aware of writing in a different way for younger people, though I suppose the language is more of a challenge and you have to be aware of what's acceptable and what's not. Like many children's authors, I struggle with the dialogue, trying to give it an up-to-date flavour without including expressions that would quickly date.

Among authors who write for the 11+ age group, who do you really admire?

That's a great question. Jacqueline Wilson is one of my favourites and I wish she'd been writing when I was young. I recently discovered Jenny Valentine, who wrote 'Broken Soup' and 'The Ant Colony' - both brilliant books. And I love Jenny Downham's 'Before I Die'. You'll see I'm more into realism than fantasy, though I enjoy fantasy novels for younger children. Tove Jansson (creator of the Moomins) is my favourite author of all time and I still regularly read her books.

Now that your third book is about to be published, are there any valuable lessons you've learnt along the way?

Never give up on trying to get published, while at the same time writing new things and recognising that some books may be 'learning experiences' that will never see the light of day. Don't be too critical when writing your first draft - in fact don't be critical at all - let your imagination go. You can reshape, rewrite and edit later, when you've got something to work with.

Last time you visited the blog, you mentioned several other projects you were working on. How are you progressing with those?

My novella for adults, currently called 'Mondays with Marguerite', is finished and looking for a home. It's written from the point of view of a woman with Alzheimer's and is also the story of her 11 year old great grand-daughter, who has troubles of her own. The two of them make friends and their stories intertwine. It could be difficult to find a publisher, as it's only 40,000 words. We'll see. I may decide to release it as an eBook on my own.

I've also finished a teen novel and am working on a sequel to 'Chloe'. And for adults, I'm writing a novel with a rather experimental structure. It will have to be an eBook because of the way it's designed to be read. See my blog if you are interested - comments welcome. The sequel to 'Charity's Child' is currently simmering on the back boiler - not sure why. And I have a series in mind for younger children, aged seven to nine. It will be set in about 2030 and have robots in it, but so far I don't know much more than that.

Thank you Rosalie. I am looking forward to reading 'Coping with Chloe', and hope it does really well for you.

'Coping with Chloe' is published by Phoenix Yard Books and is available from Amazon. Rosalie also has a website here.
Posted by joanne fox at 06:59 20 comments: 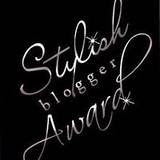 Unaccustomed though I am to being called stylish, I am now obliged to tell you seven things about myself.

2. When I was a child my grandparents often took me to Twycross Zoo. I grew very fond of the ring-tailed lemurs.

3. I've been bargain hunting in charity shops since I was sixteen. My first ever purchase was a red cotton dress with a pattern of small grey squares. Thirty years on I continue to get the same thrill when I find something I really want for just a few pounds.

4. I stopped eating red meat when I was eighteen. I still eat fish occasionally, but I have spells of giving that up too. Like after I went to the Sea Life Centre and saw how delicate and pretty the baby plaice were.

5. My number one favourite book is Great Expectations.

6. In my lifetime I've had seven cats, four dogs, assorted rabbits, guinea pigs and fish. This does not seem nearly enough animals and I wish I had a house with a bit of land so I could take in a few homeless donkeys.

7. I'd like to see Venice but canals make me nervous. Their sides are so steep that if I tripped and stumbled I would have nothing to grab onto and so would probably take a nose dive into the drink. And I cannot swim!
Posted by joanne fox at 05:26 18 comments:

In the belief that it's good to be open to new experiences, yesterday I ate a pickled walnut. Foul! No wonder my manager was trying to get rid of them. My tongue felt all shrivelled and wrinkly from the vinegar - like your fingers when you've soaked in the bath too long. Is anyone a fan of pickled walnuts? If so, please enlighten me about the attractions of these bloated, black, mushy blobs. Don't we do some strange things with food?

I've been working extra days lately, and am really looking forward to having next week off. There are two almost finished stories which I need to polish up and submit. I'm also in the process of shredding my notes from when I did my mental health training and it will be so nice to see the back of all that dusty old paperwork. And then of course there's the garden, which I'm desperate to start on again. It's cold today, but maybe next week will warm up. In the meantime, here are some snowdrops in the park behind our house. 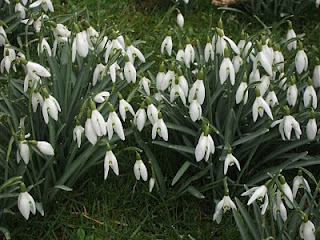