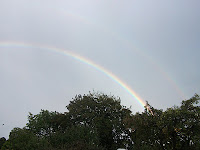 Picture of a double rainbow we saw here a few weeks ago. Squint closely. There are two rainbows there, honestly, although the second is quite faint above the brighter one. I think this is supposed to bring luck!

We were not so lucky when the new next door neighbour ran into our car on Sunday. Is this judgement on me for laughing when a neighbour down the road reversed into THEIR neighbour's car?

Monday brought an email from People's Friend, accepting a story, so I am in forgiving mood. This story has been a long time in the telling. I began writing it a whole two years ago. Something was wrong with it - but what? I didn't know. Into the drawer it went. This summer I took it out again. Straight away I saw that one of the main characters wasn't really a very nice person. Not only was he making the story too complex, he also had a snide air about him which was totally wrong for a People's Friend story. Once I'd written him out, all my characters were much happier and able to get on with their lives.

Maybe a bit of the rainbow's luck did fall on Zigzag Road after all. Just as well, since I had a shoe splurge at the weekend!

Wishing you rainbows - especially double ones.
Posted by joanne fox at 08:28 23 comments: