It's Wednesday's challenge at Diving in the Word Pool again. 3 words to work into a 33 word mini-story. This week's words were dragon, fly, and knight. Here goes...

Father called the queen a dragon. In his hand she'd fly round the board, crushing knights and bishops. He always won. Until mother died. And then I found no triumph in my victory.
Posted by joanne fox at 01:32 10 comments:

When I got home from work yesterday I found our new TV had been delivered, and everything was functioning just fine. Somehow, between then and the start of Andy Murray's match at Wimbledon, we lost the sound. Oh, for the days when we had a volume knob on the TV which you could actually turn up and down without a 32 page manual to tell you how!

Scared to fiddle too much in case we lost the picture as well as the sound, I turned on the subtitles so at least we could see a little of the commentary. I am intrigued to know if the subtitles are done by some kind of voice recognition, because they had the air of predictive text messaging. Words - but not as we know them. For instance we had gems such as:

"A change of brackets."

The subtitles were refreshingly free in their use of exclamation marks! And did they mind using a question mark and an exclamation mark together?! No! I also noticed some of the commentators' remarks, which might normally have passed me by, were really quite poetic:

"The sun is setting on Simon's challenge."

And I liked how very few words could be used to convey a dramatic situation, which should be a lesson to those of us who like to flirt with flash fiction now and then:

"His mum is thrilled."

Yes, I think sport with subtitles could become an interesting feature of my summer. Meanwhile, here is a photo of the prettiest bit of my garden at the moment. I'm calling it tea house corner. 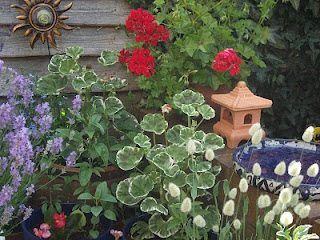 Gosh - where did that week go? It's time to post my entry for this week's microfiction challenge on Diving in the Word Pool. This week's words of inspiration were: countryside, rose, and sunshine. So here is my attempt in the 33 words allowed. I'm not sure if it qualifies as a story but I tried to make it suitably seasonal...

Rose snored in the sunshine.

Rose, though, was a city dog, dreaming city dreams. What were rabbits compared with postmen? In shorts!
Posted by joanne fox at 00:31 11 comments:

Yes I know it's now Thursday and I apologise for being a day late with this! Ellie Garratt at her lovely new blog 'Diving in the Word Pool' has had a terrific idea. Each Wednesday she will post 3 words. Our task is to use one, two or even all three of those words to make a story. The story cannot be longer than 33 words in total. See Ellie's blog for fuller details.

So below is my attempt in 33 words, with apologies also for rubbishness. I'm sure I will improve at this challenge with more practice.

Max dreaded the morning-after scene in the squalid seaside hotel. But his relief at waking alone was tainted by the message scrawled in eyeliner across the mirror. "Any port in a storm."
Posted by joanne fox at 09:08 16 comments:

It's always exciting to have a story accepted. And extra-specially-exciting when the acceptance is from a magazine which hasn't published anything of mine before. So, as you can imagine, this week I am extra-specially-super-duper-excited that Australian magazine That's Life wants to use one of my stories. Australia - I love you!

I'm also off to a big gardening show on Thursday called BBC Gardeners' World Live, at the N.E.C near Birmingham. That's pretty exciting too.
Posted by joanne fox at 02:36 11 comments:

Quote of the day

In a letter from the bank this morning:

"We've had a fantastic year, therefore your share of the profits is £2."

I had hoped to use one of my photos from this week's trip to Warwick Castle to update my profile picture. This one might be OK when I've cropped it. (I'm on the right.) 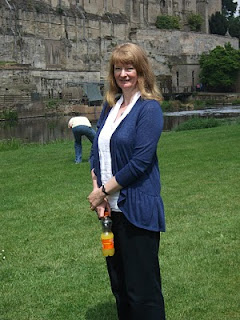 Warwick bills itself as 'Britain's ultimate castle', which is quite a statement. But there really is loads to see and do. And if you use 2 for 1 vouchers from the Radio Times, as we did, then it's not bad value for a day's entertainment. 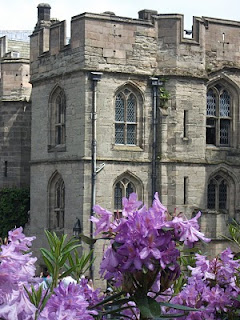 Jousting takes place during Whitsun week, and then for the schools' summer holidays. Health and safety rules being stricter than they were in the medieval period, you have to watch the jousting from the opposite bank of the river. But there is plenty of time afterwards to see horses and jousters up close. 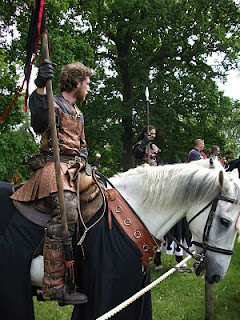 If you're feeling energetic you can climb the castle walls to see the views across Warwickshire. The big wooden structure on the left of this picture is a replica of a medieval weapon called a trebuchet. We didn't stay late enough to see it in action, but it's used to hurl flaming missiles through the air! 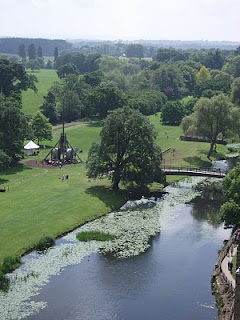 This morning we had a sparrow in the bedroom and I was in such a panic. The whirring noise of little birds' wings always does that to me. But anything bigger than a parrot and I am fine. At Warwick they have fantastic displays of falconry. I'd have liked to get decent photos of this display but I was too busy gasping at the huge wingspans of the vulture and the American eagle as they swooped in low over our heads.

There are also lots of quiet corners, like the Rose Garden, where you can recover the use of your legs from all the walking. 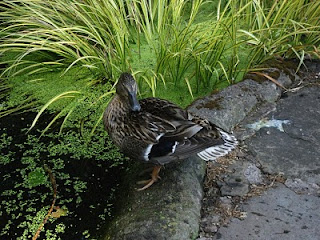 And see odd things that you wouldn't expect. 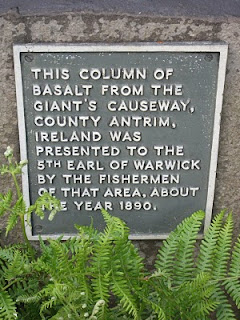