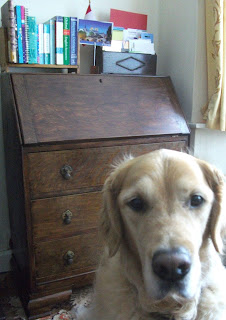 I wanted to show you my new desk, but you know how a certain dog pops up everywhere. Harvey's rather full of himself at present, as he is to appear in a Christmas story later this year. He doesn't mind that I changed his name for the purposes of the story, since he has already had friend requests on Facebook from people he doesn't know. How do these people find you? It's a mystery. Of course if genuine friends of mine wish to befriend Harvey, that's fine. He's a pretty friendly dog.

My desk cost twenty pounds in a charity shop. Maybe my grandparents had a similar one when I was small. There feels something very familiar about all the neat compartments inside the fold-down front.
Apparently the young folk refer to a charity shop as a 'chazza'. Does anyone else know this expression? It was a word I'd never heard before, but now I'm using it all the time, being such a chazza addict. 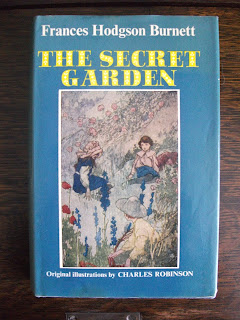 Nostalgia seems the theme of my life lately. I've been re-reading a childhood favourite, 'The Secret Garden' by Frances Hodgson Burnett. It's a lovely escapist book. I think you can read it at any age and still be uplifted by it.

And two other nice books I bought from the chazza recently for a couple of pounds: H.E. Bates' 'The Darling Buds of May' and 'A Breath of French Air'. The latter seemed particularly appropriate after my little excursion this summer. I love the 1950s style of the covers, and have enjoyed reading them both, although it is hard not to picture David Jason as Pop Larkin. 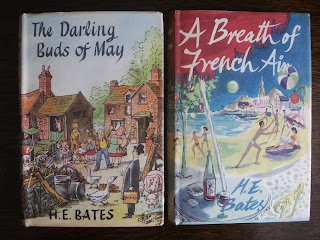 That's it for now. The desk awaits!