What is it about baths? Often I get in feeling so depleted of ideas that I wonder if I'll ever write another story as long as I live. When I get out again some little notion has floated into my brain on a sea of soap bubbles.

It makes me think that if I ever tried to write full-time I would need a constant supply of hot water and fluffy towels. Is bath foam tax deductible? Anyway, despite last week bringing my first rejection of 2011, I also wrote a new bath-inspired story.

Do you want to win an iPad? Every year classical music station Classic FM holds a vote to find the UK's top 300 pieces of classical music. It's called the Hall of Fame. If you vote you automatically get entered into a prize draw, and this year you can win an iPad or £100 of high street vouchers. Admittedly I've never won a bean, although I've voted several years running. But this year you (or I!) may be lucky. Enter at Classic FM's Hall of Fame page. Sorry if you are an international visitor, but this is only open to UK residents.

Thirdly I must just say I'm really loving 'The Lollipop Shoes' by Joanne Harris. I've read a couple of her other novels, but I think this is the best so far. Chocolate, mystery and magic. Scrummy!
Posted by joanne fox at 06:51 15 comments:

Progress (and a dilemma)

After a slow December I've sprinted into January by submitting five stories in a week. Only one is a totally new story, but as I mentioned in a previous post, that unfinished and rejected drawer had been lying dormant for some time. Now I'm in a fit of sorting, sending and shredding, and it feels good. I am never optimistic when I send off a story. I just reach a point when I know I've given it my best shot and further rewriting will only bring stagnation rather than improvement.

It's heartening to hear that even writers who are well established in their field still have doubts about their work. I found lots I could relate to in Teresa Ashby's recent post 'What Do I Do? The Uncertainty of Being a Writer'. I particularly like the bit where Teresa talks about every piece of writing being a new beginning. Certainly every time I start a story, I have no idea of how I'm going to tell it. Often I don't know what will happen or how it will end. The only way I find out is by continuing to put one sentence after another until the story becomes clear to me. I think curiosity is an important factor when I'm writing. After all, if I am not curious about what happens to my characters, then why should anyone else be?

On a different note, I have a balloon dilemma. We all know that it's unlucky to leave our Christmas decorations up later than the sixth of January, don't we. This is not an unfounded superstition. I noticed last Friday (January the seventh) that several households in Coronation Street and Eastenders still had their Christmas trees up - and see how much bad luck they get.

This Christmas I bought one of those foil ballons, which the party shop inflated for me. The lady behind the counter assured me that if I let the balloon down carefully by putting a drinking straw into the valve, I could have the balloon re-inflated next December. Well, last Wednesday I stuck a straw in as she told me. I expected the balloon would go flat fairly quickly. Five days later it's still on the ceiling. Now I know some of you will probably tell me to stab it with a pin. But that seems somehow... cruel. So if anyone has a tip for letting my balloon down gently, then I'd love to hear from you.

Quote of the Day 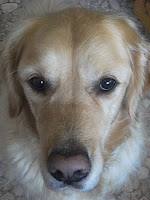 Overheard in the supermarket:
"Dogs have ears, you know."
Posted by joanne fox at 07:22 11 comments:

And a Happy New Year!

Suddenly it's 2011! How did that happen? December went by in a flash and I confess I only managed to submit ONE story the entire month.

I hope you all enjoyed Christmas and received some nice prezzies. My best present was an email from an old friend I hadn't heard from in 30 years. I guess if we'd had an award at school for the girl least likely to get a tattoo, she and I would have pretty near the top of the shortlist. How funny that we have both ended up with one!

Now it's New Year's Day, and I've recharged my writing batteries. The drawer marked unfinished and rejected is about to get a serious makeover as I make up for my lack of submissions prior to Christmas. I'm not big on making resolutions, but I'd like to spend less time faffing about during the next few months.