One of my Sunday boot sale bargains was Meg Rosoff's first novel 'How I Live Now'. I sped through half of it last night, and woke up this morning just desperate to continue. Unless I'm on holiday, reading is my evening pleasure, so I am holding off until later before I pick up the book again. Much as I'm dying to know the ending, part of me doesn't want to get there! Awesome is not a word I often use but today I'm going to use it. Awesome!
Posted by joanne fox at 01:53 7 comments:

Quote of the day

Seen embroidered on a cushion:

"The important things in life are not things."
Posted by joanne fox at 06:19 8 comments:

I'm on the shelf this week. To be exact, in the July 20th Woman's Weekly with a short story called 'Conversations with Jenna'.

Today I've been writing at the museum. I enjoyed it. No-one took any notice of me, or if they did then they probably assumed I was an art student or something. I came home with several pages of scrawled notes, both about the exhibits and the visitors. People watching is endlessly fascinating isn't it.

Another thing I found fascinating was the museum's 'Adopt an Object' scheme to raise funds. Depending how much you want to spend you can adopt a pearl button, an ancient Egyptian funerary mask, a wedding dress from 1891, a portrait of Oliver Cromwell, and several other paintings which would not look out of place on my living room wall. That's my Christmas shopping sorted then!
Posted by joanne fox at 07:15 23 comments:

It's the last Word Pool Wednesday today, as Ellie is going to concentrate on her other writing projects. Good luck Ellie! And thanks also for running the Wednesday challenge. I can honestly say it has prompted some new ideas which wouldn't have come to me otherwise.

Anyway, today's words are kitty, charity, and donation. As ever, it's got to be a mini-story in 33 words. I'm off to work now so I'll be back later to catch up on comments and other entries for today's challenge. Are you sitting comfortably? Then I'll begin:

"Stick your charity," squawked Kitty Malone, Cockney sparrow of the music hall. "I ain't put my 'at there for donations!"

"Keep it," replied the gentleman. "They say talking pictures are coming to town."
Posted by joanne fox at 23:50 5 comments:

Just popping in to pass on news of a writing competition run by Claire Apps at her website Creative Writing for All. The theme is domestic violence and any profits made will go to Women's Aid. There are short story and poetry categories. Prizes in each category are £70, £35, £20. Closing date November 30th 2010.
Posted by joanne fox at 05:14 6 comments: 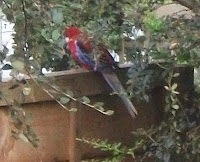 It's not a great picture. I had to take it from the kitchen window and I only have an average zoom on my camera. But I had such a beautiful surprise yesterday evening when that mystery bird, which I mentioned in my previous post, appeared again in the garden.

The size is hard to judge in the photo, but it is bigger than a budgie and smaller than most parrots I've seen. Notice the vivid scarlet and blue of its feathers? Last night I looked on the Internet at all sorts of parrot-type birds. I found pictures of some birds called Crimson Rosellas. Their red and blue plumage looks very similar to that of our bird and I am now wondering if that's what it is. Maybe someone more knowledgeable than me will be able to identify it. I hope it's enjoying life on the wild side.

Apologies to Ellie at Diving in the Word Pool as I did not manage the Wednesday challenge this week. I've been working on a new story which is quite different from anything I've written before. Perhaps you know the feeling of having an idea right at the edge of your mind and reaching out to try to catch it (rather like catching a mystery bird!). I'm afraid to let that idea get too far away from me in case I lose the thread. I'll feel better once I've finished the first draft.

Meanwhile, in any idle moment I find myself gazing out of the window, seeking another glimpse of our unusual visitor. Here birdie, birdie...
Posted by joanne fox at 09:25 9 comments:

It's that frog again

Can you see him? He is right in the centre of the picture. This week we also had a vivid red and blue parakeet type bird in the garden! Sorry I was not quick enough to snap a photo, but I'm keeping my eyes peeled for another sighting. 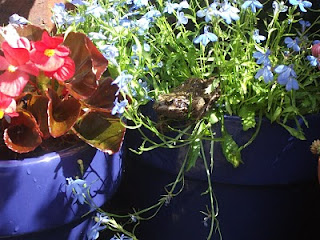