I never used to believe in allowing dogs on furniture. But then... 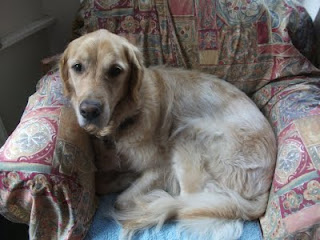 Harvey came! Now we can't get rid of the old armchair which doesn't match the new sofa and chair. Nor can I put a small bookcase into that spot by the window, as I had planned to do. And how he can be comfy crammed into that little space is beyond me. But if Harvey's happy, we're happy. Mostly.

If you were passing by last August you may recall Harvey found a humongous fungus in the garden. August must be puffball season as there is another one sprouting up. 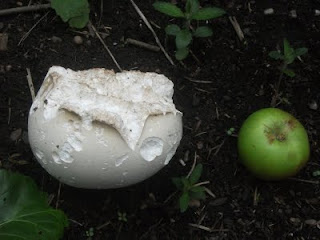 It's quite a bit bigger than our windfall apples, as you can see. I hoped it would continue getting bigger and bigger, until we could climb inside and sail away like James and the Giant Peach. But things are nibbling at it. Whether Harvey is one of those nibblers I don't know. He's not saying.
Posted by joanne fox at 05:53 12 comments:

A silverfish in the gravy and other strange events

I've officially done my back in. The doctor has prescribed a week off work, plus co-codamol and 'gentle pottering'. No-one would choose to be ill or in pain, but when you've been on the go for a while it's quite a relief to have somebody order you to stop. For the first time in ages I sat in the garden today, without feeling obliged to get up and deal with weeds, untidy lawn edges or holes dug by Harvey. Oh, and from the funny rash on my hands I think I've also developed primula allergy which is another good reason to leave the garden to its own devices for bit.

A few days ago I watched a neighbour reverse off their drive, slap bang into their other neighbour's car! Of course I wouldn't have been so amused if they'd reversed into my car, but happily Mr F. Focus was safely tucked up in the drive.

The following night I opened the gravy granules to find a silverfish running round inside. How did the silverfish get in the gravy? It sounds like a joke, but I'm rubbish at punchlines so maybe someone else can suggest one. I threw the gravy out, by the way, as it was nearly gone anyhow.

Yesterday I managed to write about three lines of a story. They're good lines, I think, so that's OK. If I do another three later my story might be finished by Christmas. Speaking of which I've actually seen some 2012 calendars in the shops! No wonder we feel we're constantly racing against the clock, with retailers so keen to rush us into next year already!

Well, excuse me for dashing off again but my back won't let me sit at the computer for long. Must be time for some more of that gentle pottering.