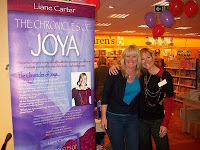 My March guest here at Zigzag Road is Liane Carter. Liane's first novel for children, 'The Chronicles of Joya', is proving a real hit. Living between England and Spain, Liane's writing credits also include a regular column for the Costa Blanca News, and articles for Writing Magazine, plus numerous published short stories and poems. On top of all this, Liane writes songs with her husband. She does the words. He does the music. What a lovely combination. I asked Liane to tell me a bit about how the process of writing a song compares with that of writing a story, and this is what she said...

"I began writing poetry at school and had the vague notion that I went to some other place to write it - I thought up on the clouds, dangling my legs.

When I learned the basic chords on guitar I started writing songs. At about seven or eight I wrote my first song, 'Momataro', inspired by the delicious Japanese book about a boy who emerged from a peach. The book, strange like me, taught me something fundamental: I had a problem chip in my brain: impatience.

If I couldn't think of a few key lines for a song, I'd search my brain until I found something - anything - to throw in to have a completed project. If I left the song half-done, I couldn't concentrate on anything else. I'd walk into things, be unable to concentrate and make myself more visible in a world I tried desperately to shrink from.

Years later I still had the problem of the first verse flowing and then the slam on the brakes from my inner genius to block the second verse. I wondered whether my ego had sabotage plans. My husband, who does all the music for the songs, told me I had self-destruction stamped across my skull.

I didn't mean to keep going back and tweaking the melody, changing the words and causing him more work. But that's the penalty for rushing, for having to finish, for impatience.

When I started getting serious with writing short stories and novels, I uncovered the truth: the ideas, my genius, wanted time to grow and take different turns. They wanted to delve on deeper levels. I had to be stripped raw with editing to uncover the gold within. And the sick thing? I loved the pain of it.

I discovered fear blocked me from that second verse: fear of not being able to top the first one; of boring the listener; of giving them less than perfect; of facing emotions within me.

The joy of digging deep and discarding impatience came in one of our songs, 'Damage Done'. Truth is painful to write; this song had me crying the first twelve times I sang it through. Yet when I decided to be editor and warrior on that second verse, to go deeper in truth, I unravelled a superior second verse I fell in love with.

It proved two things for me. Firstly, whether it's a song, a poem, a short story or a novel, expose yourself. Throw the truth out on the page and the treasures will fly not just into your lap. They'll flood your heart. Your writing will breathe and bring life into the people who share it.

Something painful that happened to me went into 'The Chronicles of Joya' and so many people have resonated with it. If I hadn't been brave enough to write the pain, many people would have lost out on the pleasure.

Change names where necessary: you don't want to hurt anyone else. And maybe once you go back to edit, you'll lose that piece altogether. It may just have been a healing process to write your pain on paper.

Secondly, I learned the incredible power of the inner child, who will not come and write her genius if I refuse her demands. She's more stubborn than I am. She's also stronger and wiser. I have a lot to learn from her. I'll play up and push her too hard and whip her to work.

She'll stop mid-step and strike. Sometimes I listen to her and sometimes... I don't. So for those of us who sometimes 'forget' to feed our inner child with play, here's a song I've written which helps me vent some frustration at myself and at her for running off. Happy writing!

Sing to the tune of 'Yellow Submarine' and clap. She likes it.

I try to drag her by the hair
She runs a mile, leaves me despair

So I buy her Plasticine
Watch a film with Mr Bean

Her genius begins to flow
She writes and tells me, "I told you so!"

Jo: Gosh - thank you so much, Liane, for taking the time to write this. I will never listen to 'Yellow Submarine' in the same way again!

For more about Liane and her novel 'The Chronicles of Joya' please visit her websites here or here, where you can also listen to samples of her music.
Posted by joanne fox at 08:23

This was lovely to read and really inspiring. I'm also going to the website now. Many thanks, Joanne and Liane for this.

I alway wondered how people write songs. If it's the words they think up first or the music or if they both come together. A lot of what you say here makes sense to me Liane. Thanks.

Thank you all for visiting, and Liane for reminding us that the best things happen when we have the courage to write from the heart. x

I'm still humming "we all live with a bolshie inner child"!

What an inspiring post! I've never really thought of that urge inside, that elusive want to be creative as a "bolshie inner child" but now that I've read this, it's so true! And to seek inspiration from within is always a fantastic start to any story!

It's a good way to look at it, isn't it Old Kitty? Thanks for dropping by. x