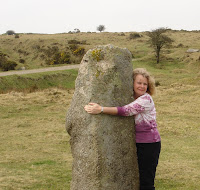 Today I have to say a big thank you to Rosie Edser for answering a few questions about herself and her writing.

Rosie regularly has short stories published in women's magazines, including Take a Break and Woman's Weekly. Welcome to Zigzag Road, Rosie, and let me begin by asking you....

How did you get the writing bug?

At school, if we are going back to the sixties and seventies. I definitely preferred words to numbers. I grew up on the classics, and also devoured comics full of tragic heroines. Many school hours were wasted dreaming up dreadful alliterative titles for my English homework. Happily I've forgotten them all now, so can't be tempted to resurrect one!

If I'd known how wonderful it is to write and create characters I would have started years ago. What actually got me started was akin to the phrase 'necessity is the mother of invention'. I used to do respite foster care for two children. During a visit to my uncle, I took them up on the Malvern Hills in the hope of doing a really long walk. The children soon got bored, so I made up a story about a dragon who was asleep under the hills. They kept going, probably as I spun out the tale till we'd reached my halfway point! We later used it as a project and wrote in characters based on ourselves. I'm sure it will sell one of these days.

Of all the characters you have created in your stories, which is your favourite and why?

There is a composite boy, about nine years old, who appears in a few stories. I used him aged four to thirty in a story once. It was about that moment you realise your parents or grandparents are fallible, and just human after all. He's actually in one I am rewriting now (or should be instead of blogging!). It centres on a woman who is recently widowed. The story is told from the boy's point of view. He's dealing with his own feelings and telling us about his mum's.

For some reason I find it easy to assume this character. I like exploring the viewpoint where life is not that complicated on the face of it, though events are usually out of the character's control. Lots of women are in situations where they have to deal with issues on behalf of others, so not by choice. This makes my nine year old boy easy to identify with - I hope!

What writing related Christmas present would you like to receive?

Practically speaking, a new printer. Especially if it is one that never jams, needs ink at the wrong moment, or makes a lot of noise while I'm thinking!

Let's imagine you're on Desert Island Discs. Which book would you take and why?

Can I take four? I have read a book by Antoinette Kelsall Bird many times over the years. 'The Daughters of Megwyn' deals with relationships between mother, daughter and grandmother. It starts in the mid-fifteenth century, and is set in the Cotswolds. Annoyingly the author has not written anything else, so if anyone knows this lady please ask her to!

I loved 'The Book Thief' by Marcus Zusak, and 'The Lovely Bones' by Alice Sebold. Both cleverly use a character with universal viewpoint to tell everyone's story.

The last book I read (and want to read again) was 'The King of Sunlight' by Adam Macqueen, former editor of 'The Big Issue'. In his own words, Mr Macqueen describes his work as 'a sort of biography', but it is so much more. William Lever founded the company that later became Unilever. The author makes him come to life as a wonderfully caring, yet dedicated and obsessive person. My favourite snippet was that Mr Lever referred to his wife as 'his better three-quarters'. What a lovely man! 'The King of Sunlight' is partly the story of Sunlight Soap, Lever's infamous product. It is also about Port Sunlight Village which he built for his workers, but more about a gentleman with very high expectations and values.

When thinking about a new story, writers often begin with a setting, a character, a situation, or maybe a memory. Do you have any particular starting point for your stories?

Usually it is something that sparks an emotion in me, or insight into another person's emotion.

While writing a story about adoption I heard the phrase 'we chose you' was often voiced to children. It occurred to me that however well meant, this could be a good or a trite phrase to hear. 'We chose you' in context of 'that's all you need to know' was not good for my character, given her desperation to fill the void of knowledge about her birth mother.

I find it easy to explore a starting point while doing something mundane like washing up. Often the setting arrives unconsciously, maybe drawn from a place I already know.

And finally, in the hope of picking up some useful tips, I always like to ask my guests whether they have any advice for newer writers.

Never delete or throw anything away, no matter how many times it is rejected. With the benefit of more practice you can edit and sell any story that has that spark of emotional hit. Magazine requirements change also, so something that is too long, too short, too controversial may be absolutely fine in a few years.

Allow plenty of time to write at each sitting. If you can write in bits, you are lucky! I find it is much the same as getting stuck into a good book, you need a clear stretch of time to do it justice.

Go to a writing class, or start one. When you read to each other, agree to be fair and honest in feedback. There is no point being too nice to be any help, although being too blunt is just demoralising.

Never ask your family or friends for feedback on a manuscript unless they are qualified to advise. My sister is not a writer, but she compiles reports and wrote a dissertation, so she does help me. I asked a friend to read something once, and I was desperate for her comments. She apologised for not getting back to me, and admitted to taking a phone call halfway through and not picking up my manuscript again! (I did sell the story later, which restored my battered ego!)

Read 'how to write' books when not actually writing. The following are very good and I recommend reading the whole book in each instance. It will be worth the time spent.

Finally, seeing your story in print is the most amazing feeling. There is nothing like it. You will want to tell everyone you meet and find your success slides into conversation several times a day. This is healthy and should be embraced. Buy copies of your magazine from every shop it is sold in, the elation outweighs a new pair of shoes every time.

Thanks again Rosie for such an interesting interview. I have forwarded your request for a new printer to the North Pole.

'The King of Suniight' sounds like a good read.
Well it is a bit more 'bloke-ish' than the others!

Yes I would like to read that myself Bazza.

I loved the interview. Thanks for the good tips and book recommendations. In addition to the wonderful writing books she mentioned I would suggest two, "Bird by Bird" by Anne Lamott and "The Forest For the Trees" by Betsy Lerner.

Great interview, thank you for hosting Joanne and thankes Rosie Edser especially for your tips to newbie writers!!! I definitely recommend attending a writing class or three - they brought me a discipline and focus that I was lacking and got me to meet deadlines and produce readable work - because the work is critiqued publically!!

I think it's so interesting that you write about a boy to a man from ages 4 to manhood! Wow! There's so much scope for this character!

Thank you, Joanne. This was a fascinating interview. I particularly like the idea of buying copies of magazines with our stories in them from every shop!

Thank you Joanne and Rosie for a great interview. Let's hope Santa brings Rosie the new printer of her dreams!

(Our printer has just given up the ghost too - I have to nip to the library to print things out!)

Thank you both for the great interview!

I love The Book Thief and The Lovely Bones, too.

Great interview, thanks Joanne and Rosie. I think I really need to check out Della Galton's book, it' s recommended a lot.

Thanks all for visiting. I've really enjoyed the opportunity to interview Rosie. Of her 3 recommended writing books, the Stephen King, Della Galton and Iain Pattison ones were already on my bookshelf and I do agree that every one of them is useful in a slightly different way. I must check out the Sol Stein.