Wild in Art, the lovely people behind numerous public art events, have taken over Birmingham with a fabulous display of giant painted owls. You may remember in 2013 they did a very popular exhibition with large figures of Gromit the dog, all over Bristol.

Now we have The Big Hoot, taking place in various locations around Brum. I already managed to spot about a dozen owls in the city centre. Here is Jack for starters, by artist Martin Band. Jack is situated by the Hall of Memory in Centenary Square. 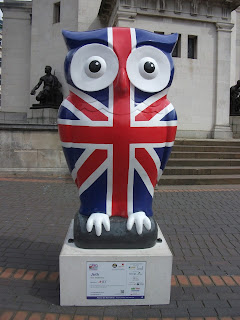 There were lots of families out following the owl trail while I was in town. At the most popular spots, people were queuing for their chance to pose with the owls.

This one is Ozzy's Owl, designed by Ozzy Osbourne and Graham Frank Wright. Birmingham is Ozzy Osbourne's home town. I think his owl represents him very well. He's located in New Street, handy for the station. 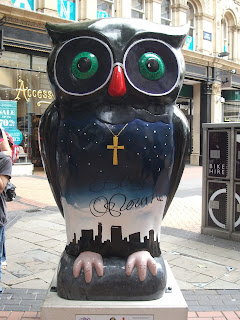 It's interesting to see how the artists who have painted the owls have drawn on inspiration from the city. The next one is the Wise Old Owl, which reflects the architecture of the new Library of Birmingham. The artists for this one were Kieron Reilly and Lynsey Brecknell. It's outside the library, obviously. 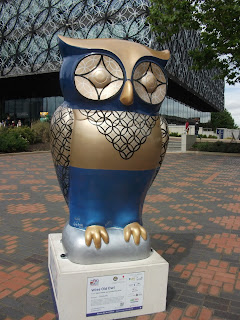 As a side note, on our local news last night there was a report that Birmingham libraries have no money to buy new books! So, we have the biggest public library in Europe, which only opened two years ago at a cost of £189 million, operating on reduced opening hours and unable to afford books! ( I do get incensed by these things.) Apparently some branch libraries around Birmingham are appealing for donations of books published in the last twelve months, particularly fiction.

Anyway, back to owls, with One Giant Hoot for Owlkind, by Vicky Scott. This one recalls the 1960s enthusiasm for space travel. It's by St Philips Cathedral. 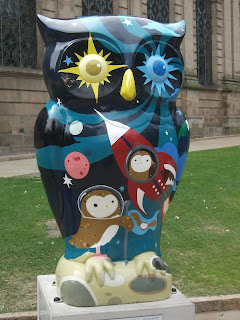 And just one more for today. Bluey. I adore this owl, in the Great Western Arcade. It looks right at home in the beautifully restored Victorian setting. Bluey is by artist Natalie Guy, and is reminiscent of blue and white china. 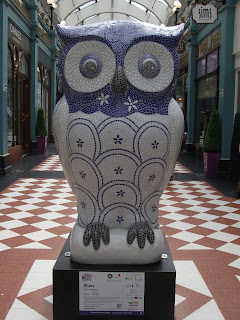 I hope to see a few more owls over the summer. They're in the city until September 27th, then will be auctioned to raise money for Birmingham Children's Hospital. I might put one on my Christmas list!

Do let me know if you're out owl spotting this summer.

Those owls are beautiful. They must be an amazing sight to see. I couldn't choose a favourite from the photos - they're all so lovely and it's wonderful they're going to be auctioned for such a good cause.

But I do share your frustration over the library books. That sort of thing makes me mad too! xx

Every owl is different and so much thought has gone into them. Libraries without books. Too-whit-too-who'd have thought it, Teresa?

We have bears here and each one is a work of art. I love your owls!

Beautiful and stunning. I like Bluey the best, but they are all magnificent. What an amazing display, but awful news about the library, Joanne. xx

Arleen, bears would also be great for an art project!

Joanna, there are 89 of the large ones, so we'll probably discover a few more favourites yet. The library situation is dreadful, but then there are councils across the country with similar problems. Sadly not everyone sees new fiction as quite as important as we do!

Wonderful! I love them all, but I think if I could have one I'd choose the library one. He looks very scholarly. I was last in Birmingham just before the new library opened and it seemed such an optimistic sign of better times ahead. I was looking forward to exploring it on my next visit - but now I'm wondering if it will still be there!

Linda, the roof gardens are really nice and also the Shakespeare room.

What a lovely idea! I'm sure that this kind of project really makes people feel good. I am amazed that a new library was built at a huge cost so recently - I fear for the future of libraries in general.....
CLICK HERE for Bazza’s fabulous Blog ‘To Discover Ice’

Bazza, the owls have brought a lot of smiles to the city. I think we should have something like this every year.

They all look fantastic. One would look great in my front garden but I bet the bids will be high.

Keith, perhaps you could create your own with chicken wire and... something?

Beautiful owls - I like the 60s inspired one - very eye catching!

I saw that story in the news, about Birmingham library, and couldn't quite believe it. Seems like a terrible position to be in!

Vikki, that owl makes me think of the wacky old TV shows about space travel, before the days of CGI.

It's a shame about the library, after the huge interest it created. You can only hope that eventually the economy may improve, and the council can put the library back into full use.

What a wonderful initiative. It's such a shame I don't live nearer as the grandchildren would have loved the owls. I love 'sculpture gardens' and have a couple within visiting distance.

Yes it's always worth looking out for events like this, especially if you have little ones to entertain. Those sculpture gardens sound very interesting too.

The idea of painting up big animals has really taken off. I remember the cows of a few years ago. In London they've had Shaun the Sheep, which I don't think lends itself very well to this treatment, although he is a lovable enough character.

Jenny, I wonder what will be next? I vote for giant Golden Retrievers.