During a recent fit of digging, I noticed a little creature struggling in the soil. On closer inspection, I realised it was a new moth, battling its way out of its chrysalis. Its tiny wings didn't look properly formed, and I was worried I'd disturbed it before it was quite ready to hatch. (Is hatch the right word?) Also worried about Harvey treading on the moth, I managed to move it onto the hydrangea where it could dry out in the sun. Sure enough, its wings gradually uncrinkled, and here it is, in the centre of the picture if you can spot it. 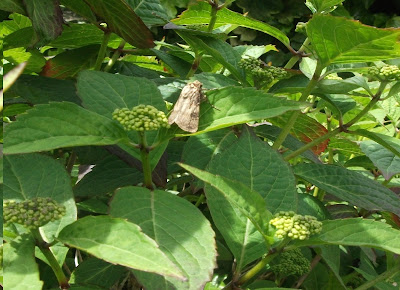 After a while it moved itself down into the shadows of the plant, where I hope it survived birds and bats. It's not every day you witness the birth of a moth! I wonder how it feels, to go into a chrysalis as one creature and come out as another. How do you suddenly get the hang of flying?

I've been looking at my 'Complete British Wildlife', trying to identify the species of moth for you. Some of the pictures give me a funny, tickly feeling at the back of my neck, so I had to stop. However, the names of moths are very poetic. The Vapourer. The Heart and Dart. The Beautiful Golden Y. The Canary-shouldered Thorn. I could go on. There are pages!

Everything in the garden is lovely and green. We have lots of yellow poppies (Meconopsis cambrica.) The odd one comes up more orange in colour, like this. I'd like to try growing the difficult Himalayan Blue ones, but don't think I have the right soil. 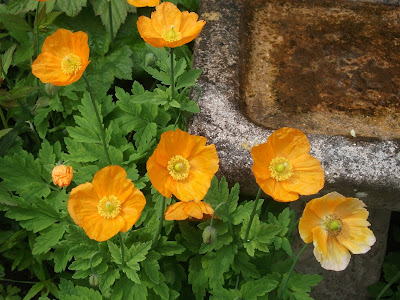 Here's Harvey in the park. I had to attach him to a tree to take this photo, otherwise his retriever snout is down on the ground, snuffling out every bit of smelly goo. He's looking affronted at the interruption to his foraging. 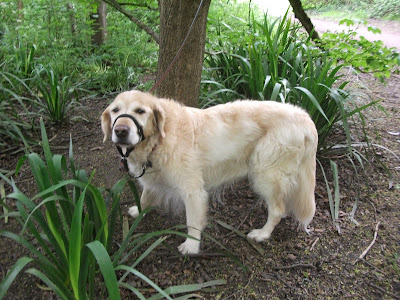 The park is all frothy with cow parsley this time of year. Also known as Queen Anne's Lace. 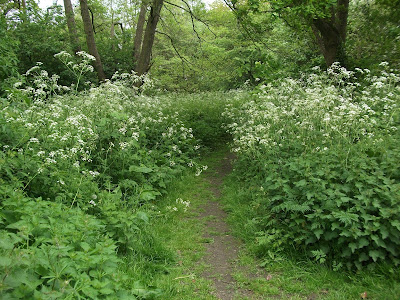 Who lives in a hole like this? Elves, maybe. Or moths with magical names. 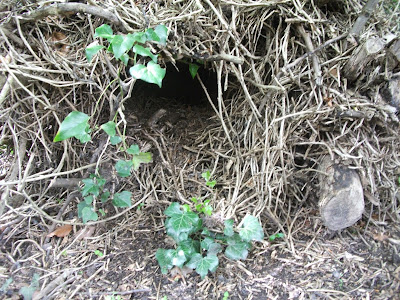 I love moths - that looks like a beauty that you saved there. The yellow poppies are lovely - but not as lovely as gorgeous Harvey :-) xx

I never look at moths in a favorable way, however, if they have color and are called butterflies, I marvel at them. How lovely of you to point out the value of all new life.

Teresa, he still manages to be a gorgeous old thing even when rolling in every stinky substance in the park!

Arleen, the wealth of new life is fascinating at this time of year, isn't it.

At first your moth story reminded me of the story of the butterfly in a cocoon, struggling to get free. A man comes along and cuts the cocoon but the butterfly didn't develop its wings because it didn't have time to grow! Harvey looks like he leads a very happy life!

Hi Stephanie. Thanks for visiting the blog. I hadn't heard that story about the butterfly, but I can relate to the man! You want to help if you see a creature in trouble, but doing the wrong thing will nearly always make it worse. Harvey says hello too.

How lovely that you rescued the moth, Joanne - it must have been lovely coming upon it at just that moment. Love all your photos!

Yes, I was lucky to see it, Rosemary! x

I am sure that, if he had been able, the moth would have thanked you! It's always good to save the life of any creature.
CLICK HERE for Bazza’s fabulous Blog ‘To Discover Ice’

Wouldn't it be funny if moths could talk, Bazza? Although maybe it sounds like something out of Stephen King!

It shows how kind and caring you are to have taken a moment to make sure the moth was okay. I think they're interesting, and there are so many kinds, so beautiful, and some, like you said a little Halloweenish! :-)

Lovely photos, and I do like the unusual names you discovered. :)

Some years ago I was able to watch a butterfly that had just emerged from it's protective cover. It had been attached to the old wooden window frame in our garage.

Carol, that sounds a wonderful experience!